I’ve spent a fair proportion of this week considering the year ahead. So far I have been mainly searching for snails in my immediate local area and I imagine that I can probably double my current total by continuing to do this. Of course, there are many species that don’t occur within walking distance of my house, or even within my current county of residence. Thus I have been searching NBN and canvassing my Twitter followers to help sort locations for some slightly more obscure species.

After doing this I came to a conclusion; the Vertigo snails are going to be really difficult. I mean, I knew they were going to be difficult before I started – that was the group that I was most unsure about – but everything I read just makes them seem even more obscure.  Thankfully, I’ve already had sites recommended to me on Twitter that might hold three Vertigo species. If these work out that only leaves me with eight more Vertigo species to see…

This week I saw a grand total of two new species, bringing my overall total up to twelve.

My new species are:

This is my second Vallonia species of the year, coming after last week’s Vallonia costata. I’ve only got one species in this genus left to go now, Vallonia pulchella.

I found these in an abandoned quarry near Potton, Bedfordshire. Clearly, they must have spread into the site since the quarry was abandoned. Unfortunately I don’t know how long ago the quarry ceased operations, otherwise that could give a rough idea of the power of dispersal that these snails have.

There is a fair amount of detritus scattered around in the quarry – bits of wood, stone, plastic etc., – and these serve as excellent places to try and find Vallonia. However, in my experience, Vallonia only seem to be found under refugia that have been relatively recently moved. Bits of stone or wood that have been there too long kill off the grass underneath and I never find Vallonia in these circumstances. Recently moved refugia, which have been in place just long enough to make the grass go slightly yellowish and sad-looking, seem to be the best places to search. Usually the shining, ivory shell of Vallonia is not too difficult to spot in these situations.

Vallonia excentrica can be easily differentiated from V. costata by the lack of heavy ribbing on the shell, as well by the way that the outermost whorl of the shell expands rapidly, giving it an ‘eccentric’ or ‘unbalanced’ appearance. This, obviously, gives it both its common and scientific names. Distinguishing between V. excentrica and V. pulchella is more subtle, and will be discussed if-and-when I find that species. 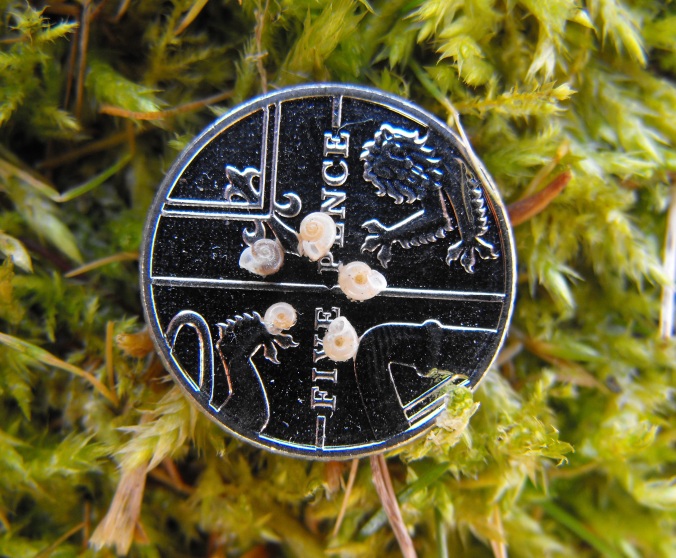 I can’t believe how long it took me to find this species, especially with how large, common and colourful it is. All I seemed to be able to find were empty shells. Amusingly, after spending some time searching for this species, I found this one half-heartedly and absent-mindedly whilst aimlessly turning over logs whilst chatting to my Mum on my phone during my lunch break.

There are two Cepaea species in the UK; C. nemoralis and C. hortensis. Cepaea nemoralis is the larger of the two species – growing up to a max of 25mm in width – and usually has a brown lip to the mouth of the shell in mature specimens, hence the common name. Cepaea hortensis, by contrast, usually has a white-lip to the shell. Of course, rules are made to be broken, and in some areas of the UK Cepaea nemoralis occurs in populations that contain forms with a white-lip. In these cases it is probably best to:

The scientific name comes from the Greek ‘cepaea’ meaning ‘of the garden’ and the Latin ‘nemoralis’ meaning ‘of the woods’. This is a fair descriptor of habitat, as the species tends to favour habitats disturbed by humans, such as gardens, parks, arable land and roadsides.

Cepaea nemoralis is almost obscenely polymorphic, occurring in a staggering array of colours and patterns, even within a single population. This collection of drawings and this photograph do a marvellous job of demonstrating variation. They also exhibit rapid, habitat related evolution when colonising areas from which they were previously absent – thanks to @schilthuizen for the article.

I also found a heap of dead shells during the week. It appeared to be an area in which empty shells naturally accrued rather than a thrush’s anvil, as most shells were completely intact. I called this a ‘snail-graveyard’ but Twitter follower @fionagilsenan suggested the substantially better name of ‘snail-midden’.

I arranged the snails by species. From right to left; Cepaea species, Monacha cantiana, Cornu aspersum and…. Helix pomatia!

I’ll have to came back later in the year to try and see a live and intact one of these – they are the largest UK land snail and are all-round gorgeous beasts.

Once again, if you’re not following me on Twitter please consider doing so at @UKSnailTrail.

For further, more in-depth information on snails and other molluscs, please check out the website of the Conchological Society of Great Britain and Ireland.